Victoria Jewelers opened its doors in 1987 when I was 23 years old. As owner/operator of Victoria Jewelers for the past 25 years, I can tell you the most valuable inventory I have acquired is my customer’s trust. By always acting with honesty and integrity, I’ve also gained their confidence and respect. My staff of skilled and educated professionals and I listen to our customers, and try to help them realize their visions. By treating our customers as a valued part of my company’s success, not only have I made them repeat customers, but they have told so many of their friends and family, that I have been able to keep my advertising to a minimum. This is a family business, and our customers always know their best interests are protected. 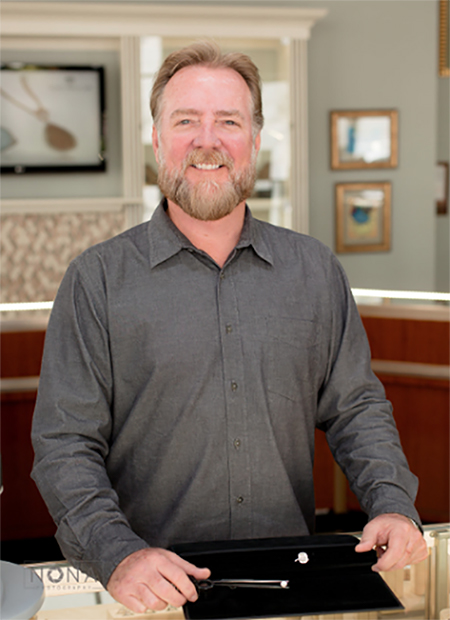 Owner and operator Frank Walters said the gleam in a satisfied customer’s eyes adds a deeper level of meaning to his work. “I’ve been doing this for a long time, and I still enjoy it,” Walters said. “Each day brings something different.”

The native Floridian said his love and appreciation for diamonds inspired him to open his own jewelry store. Before relocating to Baldwin Park in 2004, Victoria Jewelers first opened its doors in Conway in 1987. Walters was just 23 years old.

Being a successful jeweler proved to be a tumultuous journey. The first 10 years were clouded by instability and uncertainty. “There were days when I would come to work and go home and not one person walked through the door,” Walters said. “And there were years when I wasn’t sure if I was going to make it — if I was going to pay the rent.”

For the past 12 years, he’s had his wife Heather there waiting at home to support him on both his good and bad days.“She may not be [at the store] day in and day out, but she’s my sounding board when I get home,” Walters said. “I have a loving wife who’s there to support me every day by listening to problems and offering solutions.”But his struggle has shifted to prosperity.

The family-owned business has become known for restoring sacred pieces of jewelry to their original beauty. Walters said his eye for detail resonated with his customers. Baldwin Park resident Pam Fuller has known Walters for over 10 years. He has restored her wedding ring, crafted an anniversary present for her husband Jim and created wedding rings for her son, daughter, son-in-law and daughter-in-law.

“It’s a whole family affair for us,” Fuller said. “You have to go to a jeweler you can trust.”

She said her desire to return to Victoria Jewelers stems from Walters’ ability to produce creative pieces at reasonable prices. In addition, Fuller said she admires his effort to acquaint himself with his customers’ likes and dislikes. “That personal touch says a lot to me,” Fuller said.

Walters said he has trained his 11 employees to actively listen to customers and refrain from being too pushy or overbearing. Unlike most jewelry salespeople, none of his workers are paid on commission.

“We try to be very low key, because we don’t like to tell people what they want,” Walters said. “Our goal is to help them realize their vision. We really mean it when we ask, ‘How can I help you?’”

Establishing a sense of comfort and reliability with customers has proven vital to the survival of his business, Walters said. It is important for customers to feel welcomed by employees who enjoy their craft. With just under 30 reviews on Yelp, Victoria Jewelers has received 5 out of 5 stars since it started “Yelping” in 2010. Walters said customer service is the backbone of success. Taking an interest in customers, whether they are locals or tourists, is what separates his jewelry store from competitors.

“How many businesses do you walk into and feel like the people working there are really glad to be there? It doesn’t matter if you’re walking in here for a $5 watch battery, we want you here,” Walter said. “And it shows. People feel it when they walk in.”