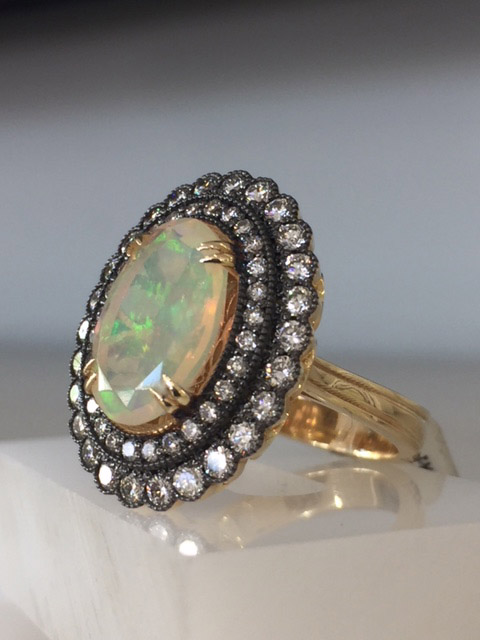 October is another special month where those born within it have two birthstones to choose from – Opal and Tourmaline. Both of these gems have a wide variety of different colors and shade combinations, making the possibilities nearly limitless.

The name “opal” comes from the Greek word opallios, which meant “to see change in color.” This name is particularly suiting due to the stones ability to display various colors of the rainbow as it diffracts light.

While dozens of different types of opal exist, only a few are universally recognized. This includes the Fire Opal and Boulder Opal.

The higher water content in opal combined with its hardness of only 5.5 to 6 on the Mohs scale makes opal more delicate than other gemstones. They can crack or “craze” under extreme temperature, dehydration or direct light.

What Does Opal Symbolize?

Australian aborigines believed that the creator of earth came down on a rainbow and where his feet touched the ground, these colorful stones were created.

During the Middle Ages, they believed opals to possess the powers of every gemstone whose color appealed in the stone, making it very lucky. Though recent superstitions consider it lucky only for people born in October, and unlucky to anyone else.

Tourmaline is found in a broad spectrum of colors. This is because tourmaline is not just one mineral, but instead a complex group of minerals. It is the trace elements within those that produce the distinct color variations.

Typically, the pink variation of tourmaline is the one used for October birthstones. This variation is called rubellite and is caused by manganese.

Tourmaline has a hardness of 7 to 7.5 on the Mohs scale, making it a very wearable gemstone.

What Does Tourmaline Symbolize?

There have been many beliefs about tourmaline throughout the ages. In 18th century literature, the stone was considered to be helpful to artists, authors, actors, and those looking for creativity.

The gem was also once thought to be related to the philosopher’s stone due to tourmaline’s pyroelectic effect – its ability to become electrically charged through heat (pyroelectricity) and through pressure (piezoelectricity). When charged, tourmaline can act as a magnet by oscillating, and by attracting or repelling particles of dust.

Are you searching for a unique piece of opal or tourmaline jewelry? Call Victoria Jewelers at (407) 895-0047 or contact us online today to learn more about our custom jewelry process and how we can create a beautiful piece of jewelry designed just for you.